Get inspired and find out how to make your own lab more sustainable. Why not check out our sustainable lab resources for support or get in touch if you have any questions.

Spotlight on a new LEAF team

From Britt Hanson, DPhil student at the Wood lab in the Le Gros Clark building, Department of Paediatrics: 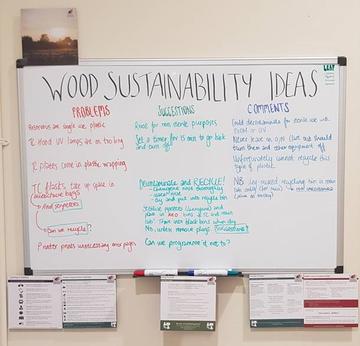 We decided to kick-start implementing Green Impact solutions in our lab and building through the Laboratory Efficiency Assessment Framework towards the end of 2019 as we became aware of the enormous potential for improvement of sustainability within our research environment.

The first major problem we decided to address was the shockingly low proportion of waste that ends up recycled from our building. We recognised that the major hindrance to this was a dearth of recycling bins in the lab, corridors and offices, and critically no bin at the collection point to hand over to the disposal company.

However, the waste collection company were able to provide us with our missing end point bin and we are now confidently able to recycle any non-hazardous dry mixed recycling waste generated in the lab and offices. We introduced an extra bin into each office, as well as the lab. While this has been a recent initiative, we have already observed a major shift in the volume of waste from ‘general’ to ‘recycled’.

The pivotal lesson we have learnt is that we should not assume that common sustainable practice, such as waste separation and disposal, is being implemented in the correct manner. We were able to improve the situation simply, quickly and in a manner that is sustainable going forward without requiring enormous effort for behavioural change. Cleaning staff will also have a simpler and less messy task in dealing with the waste.

Some of the other positive impacts we expect to emerge from this initiative is an improvement in general awareness of sustainability amongst lab members as the conversation has begun and behaviour is beginning to be altered in a simple and natural way.

Lana Strmecki, Lab Manager at the Department of Biochemistry contacted the University’s waste contractor and found out that empty gas cartridges can be recycled:

This applies to used, non-pressurised cartridges only. All canisters with O rings are classed as pressurised aerosols and must be disposed of as hazardous waste.

Saroj Saurya, Laboratory Manager at the Raff lab and a member of Green Group in the Dunn School of Pathology, has worked tirelessly to reduce plastic waste in her lab. Amongst many other great initiatives, the lab has started recycling nitrile gloves:

The Raff lab got interested in sustainably doing science almost one and a half year ago, initially with the aim to reduce plastic waste in the lab. Professor Jordan Raff and each and everyone in the lab came on board with me and it was easy for me to start some new initiatives.

Raff lab and a couple of other labs at Dunn School have furthermore agreed to pilot the glove recycling from Appleton Woods (nitrile gloves only). Raff lab has the box and other labs will collect the gloves in any of their boxes and transfer them safely into the Appleton Woods box. I will then pack and return the filled box and will give feedback to the company.

The Raff lab is saving money and the environment by changing our behaviour and attitude towards doing the science in a sustainable way. It took us almost 1.5 years to come to this situation as it takes time to change - one step at a time and without forcing people to change. We need to get everyone on board. 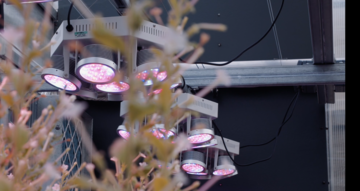 The glasshouses in Plant Sciences are crucial for departmental research and teaching. The existing high pressure sodium (HPS) and metal halide (MH) lights in the glasshouses produce a good spectrum, but they’re energy inefficient. This is partly due to the large amount of heat they generate, which can also scorch leaves, flowers and fruit, and cause heat stress in some of the taller plants we grow such as maize and tomatoes.

Following successful multi-season testing of energy-efficient LED alternatives to HPS and MH lights, we approached the Environmental Sustainability team in 2017 to discuss replacement of 18 old-style inefficient lights with LED lights. The LED lights emit only the parts of the electromagnetic spectrum that the plants require, making them highly energy efficient. Another benefits of LED lighting is longevity, with a typical lifespan twice as long as the traditional lights. Finally, because the LED lights run at a significantly lower temperature, they are less damaging to taller plants.

In 2019 we initiated the next phase of the project, replacing a further 141 HPS and MH lights. The Environmental Sustainability team worked with the Plant Sciences department and the central Purchasing team to negotiate preferential rates on the new lights, which arrived in late January.

Each LED is around 50% more efficient than what it replaces, and the project is expected to save around £25,000 a year in lower electricity bills, paying for itself within three years as well as preventing nearly 60 tonnes of CO2 per year from being released into the environment.

Find out about funding opportunities to save energy in your building.

Zuzana Bencokova, Lab Manager at the NDM Research Building explains why their freezers have been named after cute animals: 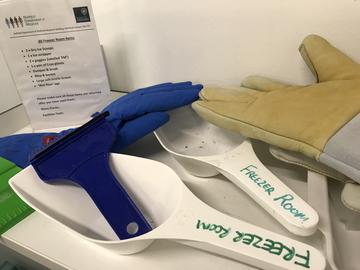 We've been doing this since 2013 when our building opened and the first freezers were moved in. We have chosen simple animal names that everyone could remember. Cute animal pictures were used to label each freezer. It's working really well: this system helps us to efficiently manage our temperature-monitored freezers and to clearly communicate with relevant researchers if any freezer has issues or needs defrosting. New research groups are surprised when we ask them to choose animal names for their freezers!

We also support our researchers with regular defrosting and provide all the required tools and guidance. In this way we ensure that all our freezers operate as efficiently as possible.