Oxford’s first Swift Tower has been set up in the University Parks, where it should provide swifts visiting Oxford with attractive nesting spots for many summers to come. 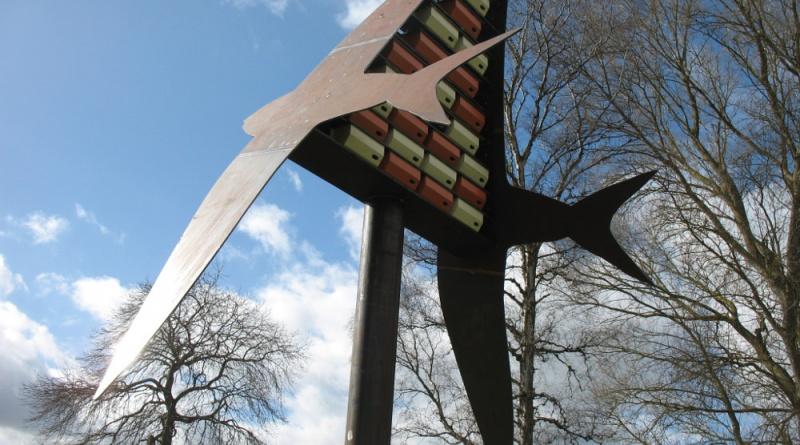 The tower’s concrete base had already been installed, and now the  main structure is in place near the pond in the University Parks. ‘The new swift tower is a welcome addition,’ said Helen Ghosh, Chair of the Curators of the University Parks. ‘Oxford University has been a proud partner of the Oxford Swift City Project, and we are hopeful that the swifts will soon make this tower their home.’

The new structure is intended to provide good nesting places for endangered swifts, and is based on the outcome of a public design competition run by the Oxford Swift City project, which is managed by the RSBP in partnership with organisations including the University, The Berks, Bucks and Oxon Wildlife Trust and the City Council. Within Estates Services, the project has involved close collaboration between the Conservation & Buildings, Environmental Sustainability and University Parks teams.

The winning entry in the competition came from Jonathan Wheeler of Lower Radley. ‘I’m thrilled to see my design finally realised. It’s been fascinating following the tower’s progress, including joining other volunteers in painting the nest boxes to match the brickwork colours of nearby Keble college,’ he commented. ‘I hope it will provide a pleasing and eye-catching visual statement that will raise public awareness of swifts, and hopefully go some way to reducing their decline.’

The tower received planning permission late in 2018 and will help advance the University’s efforts to deliver its Biodiversity Strategy, launched last year, by providing much-needed nesting space for swifts. These beloved birds are in long-term decline throughout much of Britain, with their numbers falling by more than half between 1995 and 2015. This is partly because of the increasing scarcity of suitable nesting sites – they rely on small gaps around the eaves of buildings, which modern building techniques often do not provide.